The figure of the patron saint of Capri is tied very closely to the history of the island dates back to the period of the so-called Dark Ages.

In particular, in the seventh century A.D.

But the episode that led the islanders to acclaim San Costanzo patron saint of the island took place in 991 AD At that time the coast of central and southern Italy were continually infested by the incursions of the Saracens, starting from the basics of Arab rule in Sicily reduced independent of the Fatimids Caliphs, which ravaged the coasts of the Mediterranean. In particular, one of their leaders, the pirate looted Boalim sequence in Positano, Maiori and Minori; Capri looks set to become surely one of the 'stages' to swell the booty pirate, as happened in the past.

But this time something different happens. 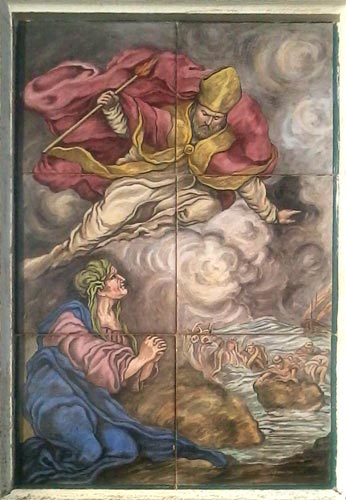 Ceramic panel depicting the legend of St. Costanzo appears that the elderly

Legend has it that all the islanders, concerned by the evolution of the story, just an old woman remained quiet in her house to wait for the enemy by invoking divine assistance.

Suddenly a vision: two creatures, and San Severino San Costanzo (Capri patron then) present themselves and reassure the defeat of the Saracens. The old takes courage and it can feel like all the other villagers, the sound of the trumpet come from the church of Saint Costanzo. That's a sudden storm stirs up the sea and the sky around the island and the fleet of Boalim, taken by the whirlwind of events, she finds herself thrown on the coast of Lucania.

Here that from this moment San Costanzo becomes the protector of Capri; the party is May 14, when carried in a procession, his statue along the center of Capri and the village of Marina Grande, between petals brooms (The flower associated with him) and roses, that women Capri spread in its wake